Things To Consider Before MBBS In Kyrgyzstan 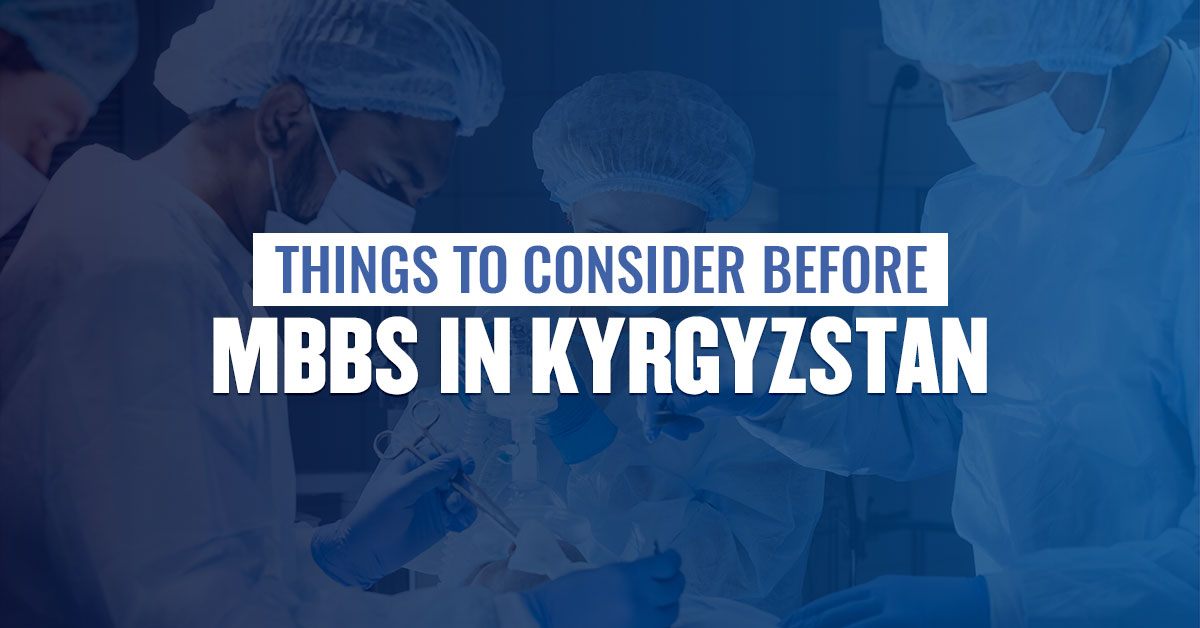 When it comes to studying MBBS abroad, MBBS in Kyrgyzstan is an exceptionally beneficial alternative for medical students. Kyrgyzstan, with its capital Bishkek, is approximately 1630 km away from India and an average flight from Delhi would take around 10h 40m to reach this country. About 8,000 Indian students are studying medicine in various medical institutions across this country.

Scrolling down the page will get you through all the basic information that needs to be considered before taking off your medical journey in this country.

(Click on the links below to go to a specific section)

Without further ado, let’s get started!

Kyrgyzstan is a landlocked country bounded by Kazakhstan on the northwest and north, by China on the east and south, and by Tajikistan and Uzbekistan on the south and west.

Most of Kyrgyzstan’s borders run along mountain crests. It is a Central Asian country of incredible natural beauty which is defined by its wild mountainous pastures as well as alpine lakes inhabited by modern semi-nomadic tribes in charming villages.

Being an agriculturally dependent economy, most of its population lives in rural settlements. This mountainous country is famous for Lake Issyk Kul. As one of the least crowded countries in the world, it has a fairly decent share of forest cover, mainly coniferous forests.

Partly its climate is influenced by its mountains and partly from its continental location far from any ocean. Mostly it has a continental climate with cold winters and hot summers but the vast deserts of the neighboring countries bring sandstorms too. Snow is common in this country.

The general climate of Kyrgyzstan is quite pleasant with four defined seasons. However, it receives very little rainfall.

The nation's largest ethnic group is the Kyrgyz, a Turkic tribe but it also includes minorities of Russians, Uzbeks, Ukrainians, and Germans.

Kyrgyzstan’s history spans a variety of cultures and empires. Being part of the Silk Road, it has been influenced by China, Iran, Middle East, the Western world, and later Russia. Thus, it is home to many different ethnic groups and rich and differentiated cultures.

Also, there are many visible differences between people of various regions of the country (like the traditions and customs of southern Kyrgyzstan in Fergana Valley and East Pamir are very different than those in the northern part of the country in the Tien Shan area)

Russian and Kyrgyz are the official languages of the country but people also use French, English & German as their second language.

From the religious point of view, Kyrgyzstan is a predominantly Muslim country. Orthodox Christianity follows Islam as the second biggest religious group.
Other Christian denominations are present but in very small numbers. Overall, the country is very secularized with very low levels of fanaticism.

Traditional Kyrgyz food revolves around mutton, beef, and horse meat, as well as various dairy products. The preparation techniques and major ingredients have been strongly influenced by the nation's historically nomadic way of life. Thus, many cooking techniques are conducive to the long-term preservation of food.

Kyrgyzstan is really a country of meat lovers and all traditional dishes contain this ingredient. But Kyrgyzstan also has vegetarian food abound with vegetables and fruits, especially from mid-spring till mid-autumn. Fruits, vegetables, and other greens here are not only tasty and healthy but also cheap.

It is best if you can cook your own meal each day as Indian food isn’t available everywhere but still many Indian food restaurants are opened across Bishkek.

Kyrgyzstan's economy relies heavily on agriculture and animal husbandry, but there is a growing service sector in the urban area.

Check out our site to know everything about applying for MBBS in Kyrgyzstan.


Historically, India has had close contacts with Central Asia, especially with countries which were part of the ancient Silk Route, including Kyrgyz Republic. Even today the countries share cordial relations which makes cultural, educational, technological and trade exchanges easier between them.

Affordable costs and good weather conditions in Kyrgyzstan makes it favourable to be chosen for pursuing MBBS abroad. Also, the considerable size of Indian medical students present in the country make it easier for the new students to adapt to the environment.