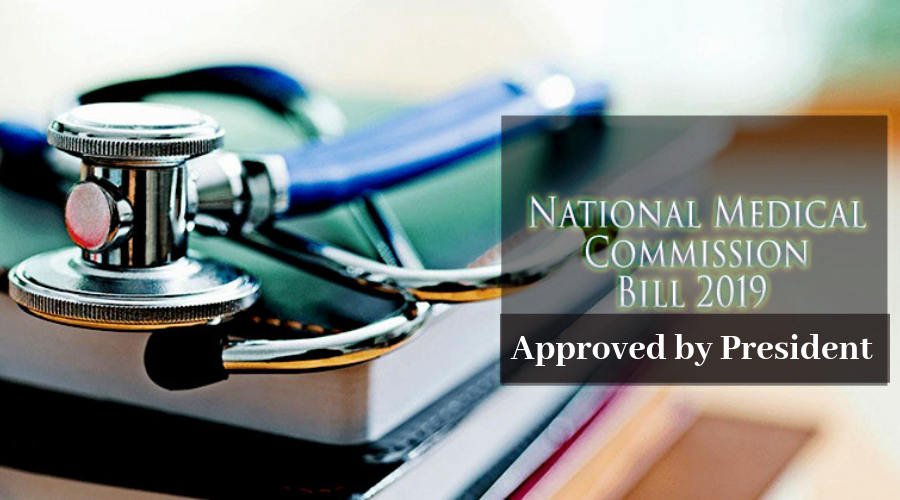 The National Medical Commission Bill was earlier this month passed by the two houses of India’s Parliamentary system – the Lok Sabha and the Rajya Sabha. The Bill was first introduced in the year 2016, when its first draft was presented by the National Institution for Transforming India (NITI AAYOG), Government of India. In major developments, the Bill was also given a green signal by the President of India, Shri Ram Nath Kovind, on Thursday, August 8, 2019. Union Health Minister Dr. Harsh Vardhan confirmed the news of the President’s nod while adding that the Bill has now become an Act and will be soon notified into the gazette.

India’s medical education system and its regulation until now were under the governance and leadership of the Medical Council of India. The MCI functioned in various areas including the following –

However, the Council was under fire for several allegations against some top MCI officials for violating the PCA (Prevention of Corruption Act). It was then that the draft of the NMC Bill was prepared and presented in an attempt to improve the medical education system of India. The Commission will now be replacing the Medical Council of India and annul the Indian Medical Council Act of 1956.

Features Introduced in the NMC Bill

1.  The Bill has put forward some proposals for change in the medical system of India, including changes in the way the examinations are conducted.

3. The Act will also introduce a new form of the exam called the National Exit Test (NEXT) for the following purposes –

4.The requirements of NEET, Common Counseling, and NEXT will also apply to all establishments including Institutes of National Importance (INIs), like AIIMS.

5.The Act will also put control of fees and other charges of 50 percent seats of private medical colleges and deemed universities in the hands of the National Medical Commission.

Functioning under the National Medical Commission

To keep the NMC a well-oiled machinery of all aspects working in tandem, the Bill has introduced the formation of four autonomous bodies –

3.Medical Assessment and Rating Board (MARB)

4.Ethics and Registration Board

The four bodies will be responsible for their respective areas of functioning to ensure the adequate performance of the newly formed commission. The Undergraduate and Postgraduate Medical Education Boards, as the name suggests will be responsible for setting up and maintenance of norms at the undergraduate and postgraduate levels respectively. The MARB will undertake the responsibility of setting up a rating system to measure the performance of medical institutions in the country. The Board will also have the power to carry out inspections and impose penalties and warnings in case of faulty administrations. Moreover, it will also have the authority to grant permission for setting up of new PG courses and the increase of seats in colleges. The Ethics and Registration Board will maintain a detailed National Register for all licensed medical practitioners in the country.

Updated websites with all data will also be mandatory for all medical institutes and universities following the implementation of the National Medical Commission. The Bill states that the websites must be updated to the extent that the NMC or any of the autonomous bodies can have access to any relevant and urgent data at all times. Furthermore, the Bill has proposed the setting up of a Medical Advisory Council to recommend improvements and changes to make the Act better for the country.

Controversy Revolving around NMC and the Government’s Response

After the introduction of the Bill, the medical associations in India had demonstrated their opposition to it claiming that it would promote the increase for quackery. The aspiring medical students too had raised queries over the National Exit Test introduced and how it would affect their medical licensing procedure.

Putting all queries to rest, Union Health Minister confirmed that the Commission will be set up within the next month; however, the implementation of the Act across India would be done in the next three years. He further added that the students appearing for NEXT solely for acquiring a license would be required to only qualify. However, if a student wishes to pursue post-graduation based on the NEXT score, there would be no limit on the number of attempts a student can make. Dr. Vardhan said a student can take the NEXT as many times as he or she so desires to improve their scores for better admission prospects.

The National Medical Commission is all set to have a team of around 25 members which will be selected by a team set up by the government. Dr. Vardhan said 60 percent of the members of the Commission will be doctors representing the medical practitioners in the country